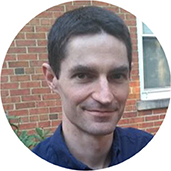 Blake Shirman is a master’s student at DePaul University, and he hopes to some day get a Ph.D. in pure math. He spends his time looking at logic puzzles and games to see if math can make things easier, sometimes in fun and unexpected ways! One of his favorite puzzles is trying to predict cell patterns (like how to place checkers on a checkerboard with special rules about where they go). It was not until he met Alexandria that Blake learned diagrams like this were being used to describe the vibrant stripes and spots on many of our undersea friends! 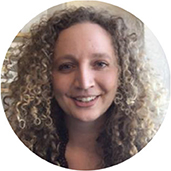 Alexandria Volkening is an assistant professor in the Department of Mathematics at Purdue University, and she got her Ph.D. in applied mathematics from Brown University. She studies all sorts of stuff with math: zebrafish patterns, of course, but also political elections, social media, and crowds of people—turns out lots of things follow rules of behavior that can be described mathematically! Her favorite fish to simulate (so far) is zebrafish, but her favorite fish for dinner is salmon. And no, she does not have any pet zebrafish, so she always enjoys visiting biologists’ labs to see them! *avolkening@purdue.edu 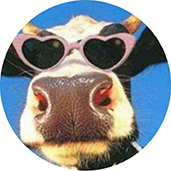 I am a middle school student, and I enjoy rollerskating, drawing, and petting my cats. 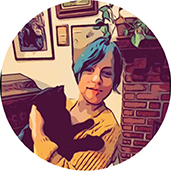 I am a third grader who loves graphic novels and I am good with animals (and fish is my favorite food 🤣). 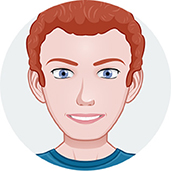 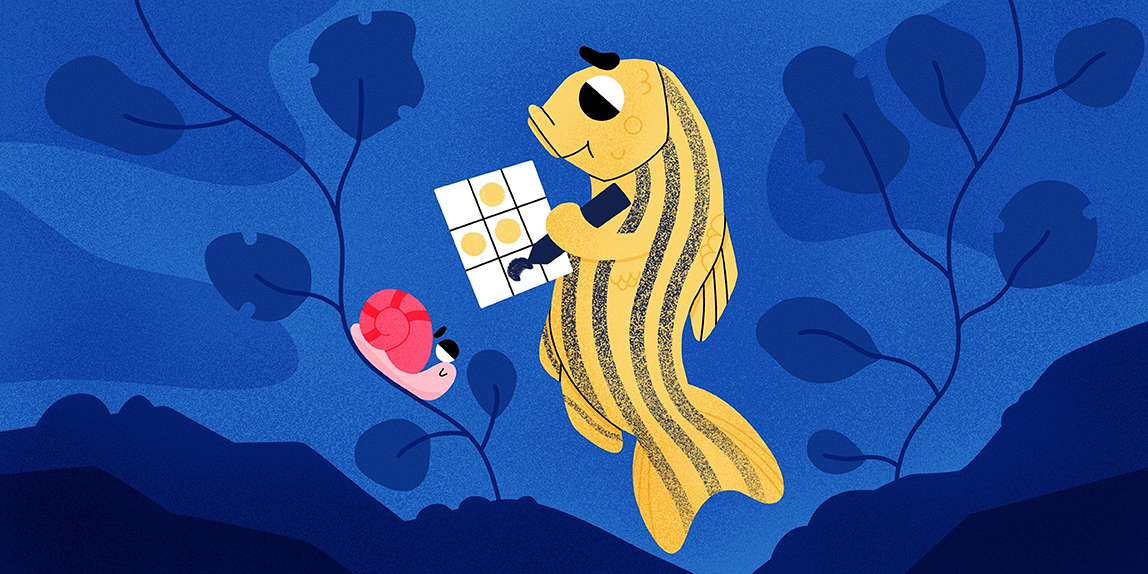 When you think of fish, what comes to mind? Maybe you think of pet goldfish, movie characters like Dory or Nemo, or trout in a local river. One of the things that all these fish have in common is patterns in their skin. Nemo sports black and white stripes in his orange skin, and trout have spots. Even goldfish have a pattern—but it is just plain gold (and kinda boring). Why do some fish have stripes, others have spots, and others have plain patterns? It turns out that this is a tricky question, so scientists need tools from several subjects to answer it. In this paper, we use biology, math, and computer coding to help figure out how fish get different skin patterns.

What Are Fish Patterns Made of?

Many types of animals have skin patterns. Zebras have stripes and leopards have spots, but fish display all sorts of patterns—like stripes, spots, mazes, and plain patterns (Figure 1) [1]. Zebrafish (Figure 1G) are good for doing experiments with, so a lot of scientists like zebrafish best [2, 3]. As you might guess from the word “zebra” in their name, zebrafish usually have stripes.

When we look at zebrafish from far away, we see black and yellow stripes. If we put a zebrafish under a microscope, however, we can see that the patterns are made up of tiny dots, or pigment cells. Pigment cells come in various sizes and colors—some are big and black (called melanophores) and others are small and yellow (called xanthophores). There are other colors of pigment cells too, and even humans have pigment cells in their skin.

Okay, so fish patterns contain pigment cells. But what is really cool about pigment cells is that they actually have the job of making the stripes we see in fish [5]! You can watch a pattern form as a zebrafish is growing here. Do you see the black cells moving around in the movie? There are small yellow cells there too, but they are harder to see.

You can think of each pigment cell in zebrafish skin like it is a person moving in a group. You can move around in a room full of people, and pigment cells can move around in the skin, too. Black and yellow pigment cells move and act in specific ways (or follow rules) to create patterns. One of these rules is that yellow cells follow black cells. It is almost like they are playing tag, you’re it! You can see a black cell leading the way and a yellow cell following it in this movie [6]! Crazy!

How Do Scientists Study Fish Patterns?

While some of the rules for how pigment cells behave in zebrafish (like yellow cells following black cells [6]) are already known, many rules are a mystery. Scientists are working hard to discover those rules. Cells are tiny, and it is tough to see them and catch them interacting with each other in the skin. Zebrafish also take a few months to grow [3], so biologists must be patient with their experiments. This is where math and computer coding enter the picture. Math is all about patterns, rules, and puzzles, and it can be combined with biology to help figure out how cells behave [7, 8]. Mathematicians and biologists use different tools to study the same problems. Bringing their ideas together makes the mystery of how zebrafish get their stripes easier to solve.

While biologists study fish by looking into microscopes and doing experiments, mathematicians write down rules for how cells might behave [7, 8]. These rules and equations are called a mathematical model—a method of describing something in a mathematical way. It is important to remember that a model is a good guess, but it could be wrong. To test their rules, mathematicians use computer coding to simulate fish patterns. This is like growing fish on a computer! One good thing about simulating fish patterns is that it only takes a few minutes, not a few months…but we would not recommend trying to eat a simulated fish for dinner!:-)

In Figure 2, each cell in the checkerboard has 4 sides (unless it is at a corner or an edge). Our rule is “one side different, the rest the same.” This means that, if you put your finger on a yellow cell, one of the cells that it touches should be black (different) and the other cells should be yellow (the same). To get some practice with this rule, try filling in the worksheet in Table 1 (instructions and answers are at the bottom of the table).

Our model has only one rule, and the truth is that we are simplifying all the ways that zebrafish pigment cells actually behave. But that is okay! When mathematicians make models, they start with simple rules and then build more realistic ones. Simple models help scientists learn, and our model is a first step. If you would like to see more realistic models that mathematicians are working on now, check out [8].

What pattern does the rule “one side different, the rest the same” create? You can try this out and build a fish pattern using Figure 3. Print this figure, cut out the black and yellow cells, and follow these steps:

Start by filling out the squares at the top of the checkerboard and slowly move your finger down the fish from left to right. What pattern forms? By following the steps in Figure 3, you are doing the same steps by hand that a computer would do to simulate a fish pattern. We have used computer coding to create fish patterns—check out our website to simulate a fish yourself!1

Fish patterns might be nice to look at, but why do biologists and mathematicians study them? The answer has to do with mutant patterns, medicine, and humans.

What happens if the pigment cells do not follow their normal rules? This can happen if a fish has a mutation in its genes [2, 9]. Turns out Figure 1G is not the only picture of a zebrafish. Believe it or not, Figures 1C,D also show zebrafish, but they are mutants! Mutant zebrafish have different patterns because their cells follow different rules (Figures 1C,D). A fish’s genes specify these rules, so mutant genes lead to mutant rules and mutant patterns. Humans can also have mutations in their genes, which can sometimes cause disease. Zebrafish and humans may not look alike, but they actually have a lot of similar genes. That is why studying zebrafish is important—if we can figure out what rules cells follow to create normal and mutant patterns in fish, we might be able to better understand normal and unhealthy behavior of cells in humans down the line, too.

Now You Get to Be the Applied Mathematician!

Scientists are working hard to discover how black and yellow cells behave in normal zebrafish, and to figure out how these cells change their behavior in mutant fish [2, 9]. For mathematicians who study zebrafish, their job is to think about a fish pattern (like stripes) and then find the rules that can create that pattern [7, 8]. This is a puzzle. How would you change the rule “one side different, the rest the same” to create a plain yellow fish? What rules and starting points create diagonal stripes? By working on these questions, you are taking on the role of mathematician yourself! What fish patterns can you create with math?

Pigment Cell: ↑ Cells are small units that all living things are made of (we are made of cells, and so is fish skin). Pigment cells are special cells that contain pigment (color).

Mathematical Model: ↑ Rules or equations that describe something in a mathematical way. In this paper, the rule “one side different, the rest the same” is part of our mathematical model.

Simulate: ↑ To imitate a real-world system on a computer. You can simulate fish patterns on our website with computer coding and a mathematical model, which provides directions to the computer: https://simulatingzebrafish.gitlab.io/zebrafish-outreach/.

Mutation: ↑ A change in an animal’s genes from the normal setting to something else. Zebrafish usually have stripes (Figure 1G), but mutant zebrafish (Figures 1C,D) have maze or spot patterns.

Genes: ↑ The biological instructions that an animal gets from their parents to specify their features (like stripe or spot patterns for a fish, or green or brown eyes for a person).

AV has been supported in part by the National Science Foundation under grant no. DMS-1764421 and by the Simons Foundation/SFARI under grant no. 597491-RWC. We are grateful to Jithin George, Katelyn Joy Leisman, Niall Mangan, and Sasha Shirman for helpful feedback on this manuscript, and BS thanks Sasha for providing suggestions on JavaScript. We also thank Domenico Bullara and Yannick De Decker for publishing their JavaScript code as part of [7], since it helped inspire the code that we developed for our website.

1. ↑When you finish your pattern, you may notice that the cells in the top and bottom row of the checkerboard do not follow the rule “one side different, the rest the same.” That is ok! Fish have a top and bottom where their body ends, and the cells there act a bit different. 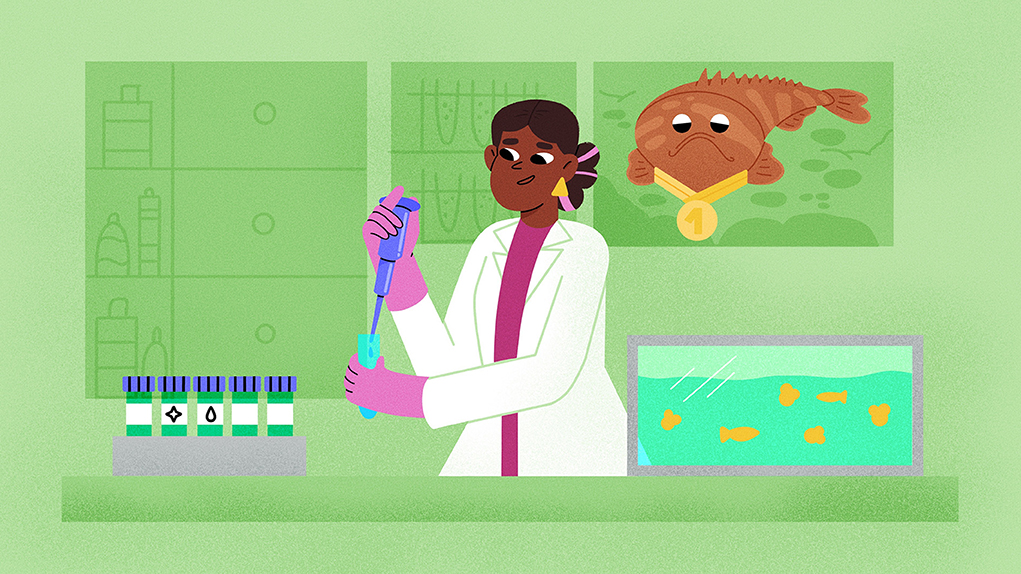 A Blessing in Disguise: From Fish Venom to Novel...

Every day, scientists make discoveries that help improve human health and wellness. Many medicines are discovered in... 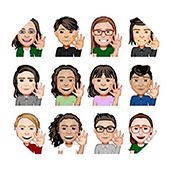 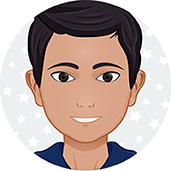 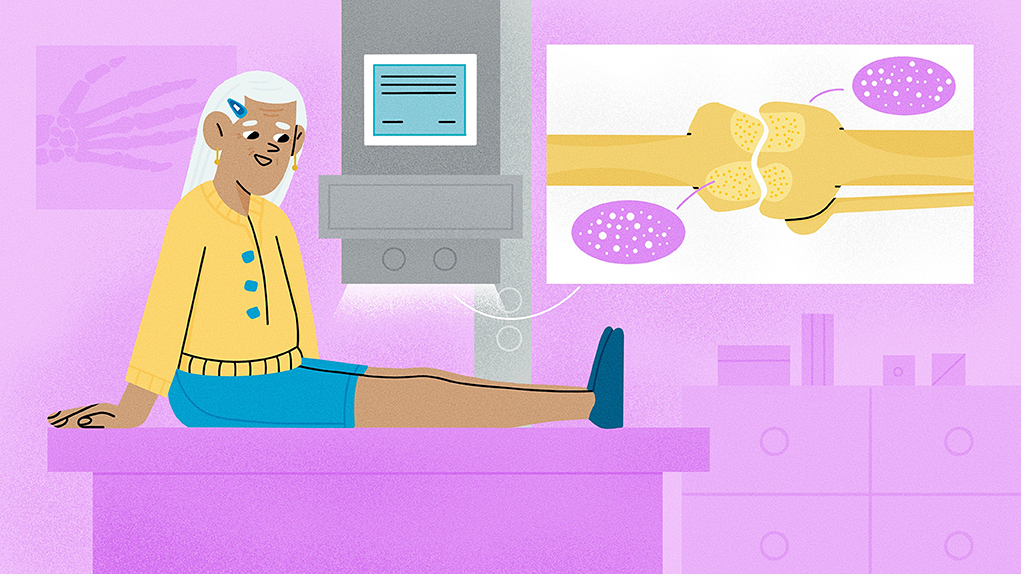 Bones are the building blocks of our skeletons—they give our bodies structure and allow us to walk, dance, and pick... 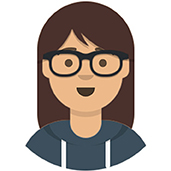 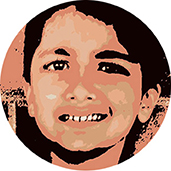 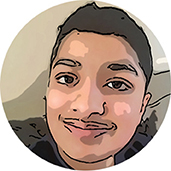 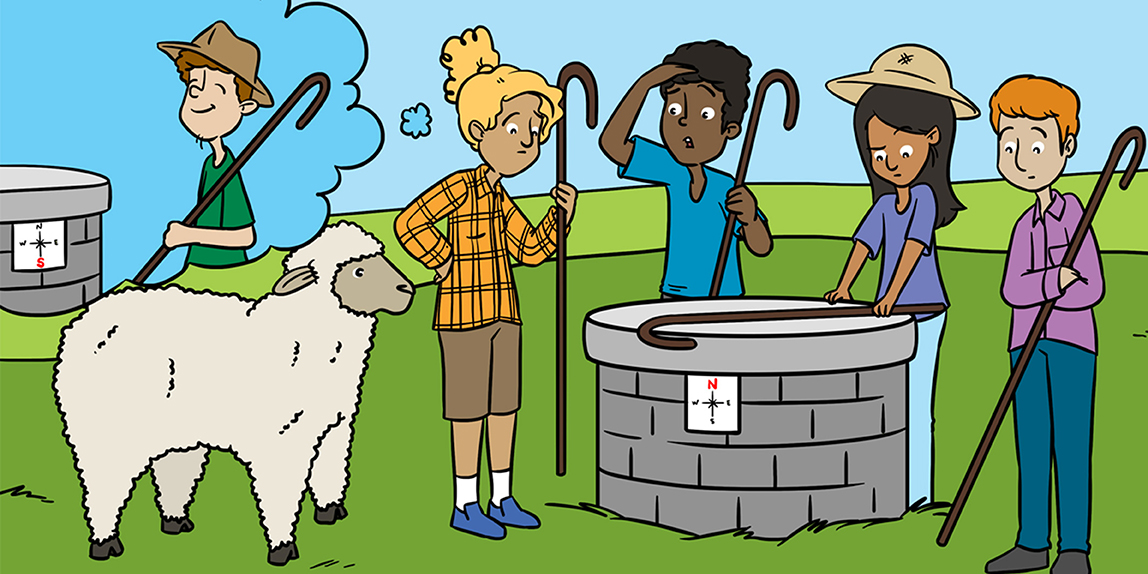 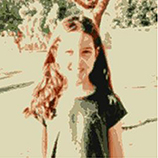 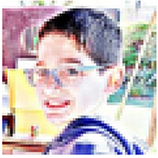 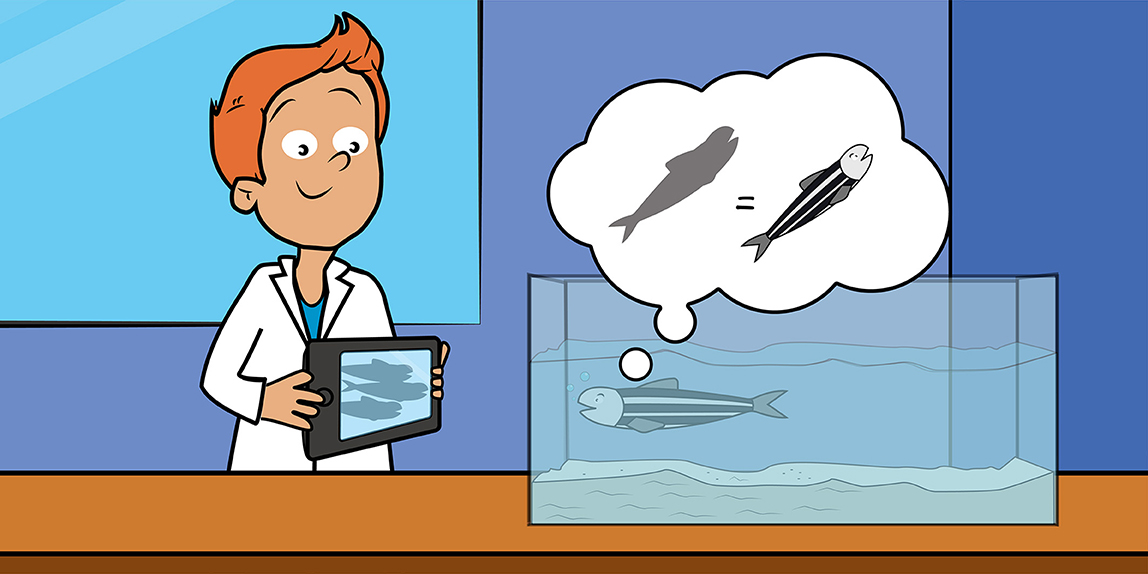 Fishing for Sociality: How What We See Helps us...

Far in the distance, you see something moving...is it a woman? When you look closely, you recognize the motion pattern... 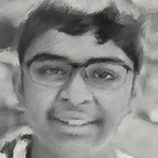 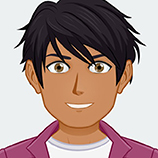