Core Concept Earth and its Resources Collection Article Published: May 20, 2021

Powering Life in the Water: Phytoplankton in the San Francisco Estuary 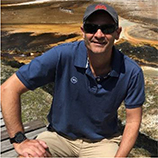 I am an associate professor of oceanography at the California State University Maritime Academy. My research interest is marine microbial biogeochemistry. I am especially interested in understanding how nutrients shape marine ecosystems. I work in diverse environments including the Arctic and Antarctic, coastal upwelling systems, the equatorial ocean, and estuaries. A native of the US east coast, I have conducted estuarine research in the Delaware and Chesapeake Estuaries and have studied phytoplankton in the San Francisco Estuary for more than 15 years. *aparker@csum.edu 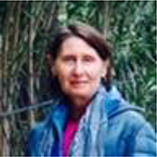 I am a Ph.D. ecologist and work as senior scientist for the California Department of Water Resources, USA. My research includes the growth, causes, and ecosystem impacts of Microcystis harmful algal blooms in the freshwater reaches of San Francisco Estuary. I also study the growth of phytoplankton in rivers and wetlands within the Estuary in response to environmental conditions, including climate change. In my free time, I enjoy watching changes in the phytoplankton each year as I kayak in rivers and lakes near home. *peggy.lehman@water.ca.gov. To find out more about my work see orcid.org/0000-0001-9556-0542. 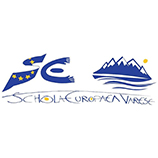 These young, very international and a little crazy scientists love to discover the world around them! They are a great team and managed to collaborate successfully with each other on their first scientific manuscripts! 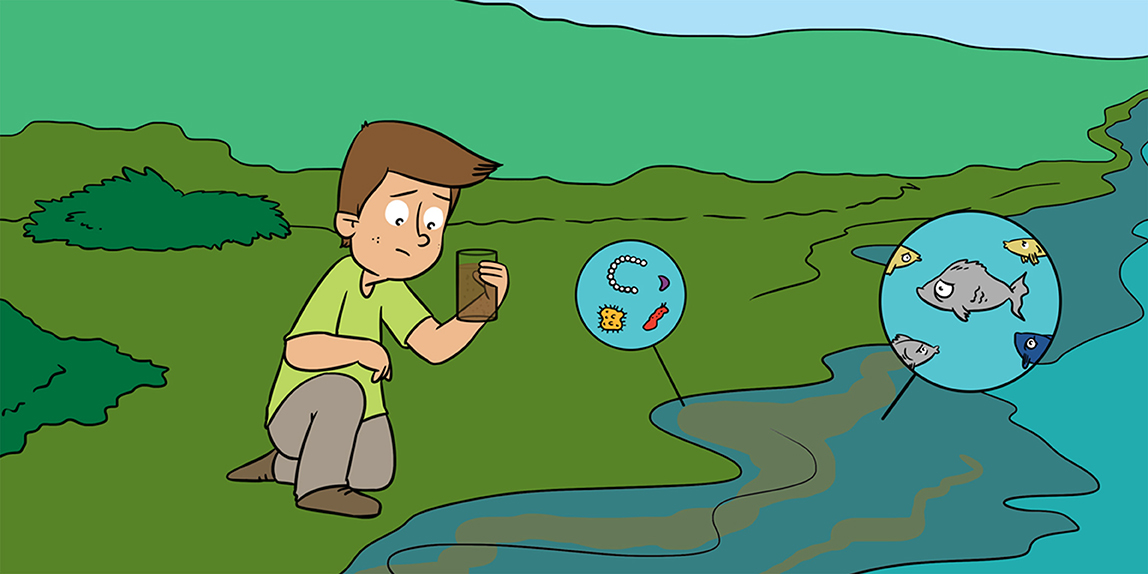 Why Are Phytoplankton Important to Estuaries?

Phytoplankton (also called algae) are probably the most important aquatic organisms that you have NEVER seen! That is because most phytoplankton are so small you cannot see them with your eyes. You would need to line up between 5 and 100 phytoplankton to equal the width of a human hair! Phytoplankton are plant-like (phyto) organisms that float (plankton) in the water. They are important because they are like tiny sugar-making factories that use raw materials around them to make food for animals in the estuary. The process they use to make this food is called photosynthesis. Photosynthesis uses carbon dioxide gas and nutrients, along with sunlight, to make sugary food that powers all the animal life found in the San Francisco Estuary.

Phytoplankton have many beautiful shapes and have amazing features that help them live in an estuary. They can look like a necklace, crescent moon, or even stars. Diatoms have a hard outer “shell” made from silica, the same material as glass (Figures 1A,C,D). Their glass shells make them strong enough to withstand the action of wind and waves. Diatoms make an oil to help these heavy shells float. Because oil is lighter than water and does not mix with water, diatoms float rather than sink. Other phytoplankton called green algae are the most plant-like (Figures 1B,E,F). They are often round balls or string-like, and they are bright green due to an abundance of a pigment called chlorophyll-a that absorbs sunlight. All the plants on earth today developed from green algae. Cyanobacteria are a type of bacteria that contain a greenish-blue pigment called cyan (Figures 1G,H). Like phytoplankton, they also use photosynthesis to produce sugars for the food web. Cyanobacteria were the first organisms on Earth to use photosynthesis, more than 3 billion years ago! Dinoflagellates come in many shapes, are often yellow or reddish in color, and are sometimes encased in a plate-like armor (Figure 1I). Two whip-like tails allow dinoflagellates to swim rapidly in many directions. Although many dinoflagellates use photosynthesis to produce sugars, they can also eat other small plankton.

Phytoplankton grow well in estuaries where water is trapped within warm, shallow areas and sunlight, carbon dioxide, and other nutrients needed for growth are plentiful. Phytoplankton nourish many animals in the estuarine food web, including fish. In fact, estuaries are often referred to as “nurseries” for young fish because of the abundant food available for their growth. Some phytoplankton are more nutritious than others, so fishery scientists and people who fish want to understand how to grow more of the nutritious phytoplankton, so they can grow more fish.

Scientists are worried about phytoplankton in the San Francisco Estuary because, compared to many other estuaries, phytoplankton do not grow well there [1]. One major reason for low phytoplankton growth is that the Estuary has very muddy water, which blocks the sunlight needed for photosynthesis. Phytoplankton growth in the Estuary is barely fast enough to keep up with the number of phytoplankton being eaten by animals, and some animals in the estuary appear to be starved for food. This may help to explain why some Estuary fish are near extinction [2, 3].

Phytoplankton Growth Is Hard to Measure!

Once sunlight reaches the surface of the water, it must pass through the water to reach the phytoplankton. Here is where things become difficult for phytoplankton in the San Francisco Estuary, because the Estuary’s waters have a lot of sediment (very fine sand and mud) that makes them muddy. Muddy water blocks sunlight from entering below the surface of the water where phytoplankton can use it. The Sierra Nevada mountains, located 300 km east of San Francisco Estuary, are a major source of the sediment. Rainwater, ice, and snow break down the mountain rock, which is carried by rivers into the Estuary. Most of the rain falls between November and April, so it is not surprising that sediment is high in the water during the winter and spring (Figure 3C). Some of the sediment in the estuary today is the result of gold mining that occurred between 1848 and the mid-1850s, during the California Gold Rush!

Muddy water is also caused by sediment that sits on the bottom of the rivers and gets stirred up by winds and tides. This is particularly important for the San Francisco Estuary, which is one of the windiest estuaries in the world and has a large tide. Ocean tides move water into and out of the estuary twice each day. So, the winds and tide act like a spoon in a glass filled with water, stirring everything up and keeping the sediment in the water, where it can block the sunlight needed by phytoplankton. Muddiness from sediment in the water can be measured with a turbidity meter.

How Do Predictions of Phytoplankton Growth Help the San Francisco Estuary?

Conditions in the San Francisco Estuary are changing [5]. These changes may include the growth of toxic phytoplankton, also called harmful algae [6] that are increasing with global warming and pollution. These changes may create more problems for animals that live in the estuary. Our research may help us understand how to reduce harmful phytoplankton and encourage the growth of phytoplankton that will feed estuarine animals. Whatever happens, we know that phytoplankton will continue to be among the most important aquatic organisms that you will NEVER see!

Estuary: ↑ A place where the river meets the ocean water as it moves inland along rivers due to the tide. Tides are the daily rise and fall of ocean water due to the attraction of the moon and sun.

Photosynthesis: ↑ A process used by plants, algae, and some bacteria, which uses the Sun’s energy and carbon dioxide gas from the air to make sugars they can use for growth.

Chlorophyll-a: ↑ A green pigment in plants and phytoplankton that captures the energy of the Sun for photosynthesis.

Model: ↑ A way of using math to describe processes in nature as simply as possible.

Fluorometer: ↑ A scientific instrument used to measure the amount of light produced from a material.

Radiometer: ↑ A scientific instrument used to measure the amount of energy from the Sun.

Turbidity Meter: ↑ A scientific instrument used to measure how much light moves through water.

PL would like to thank the California Department of Water Resources and the Interagency Ecological Program for supporting this work. Thank you to T. Brown at CA Department of Water Resources for images in Figure 2. All symbols used within the figures are courtesy of the Integration and Application Network, University of Maryland Center for Environmental Science (ian.umces.edu/symbols/). 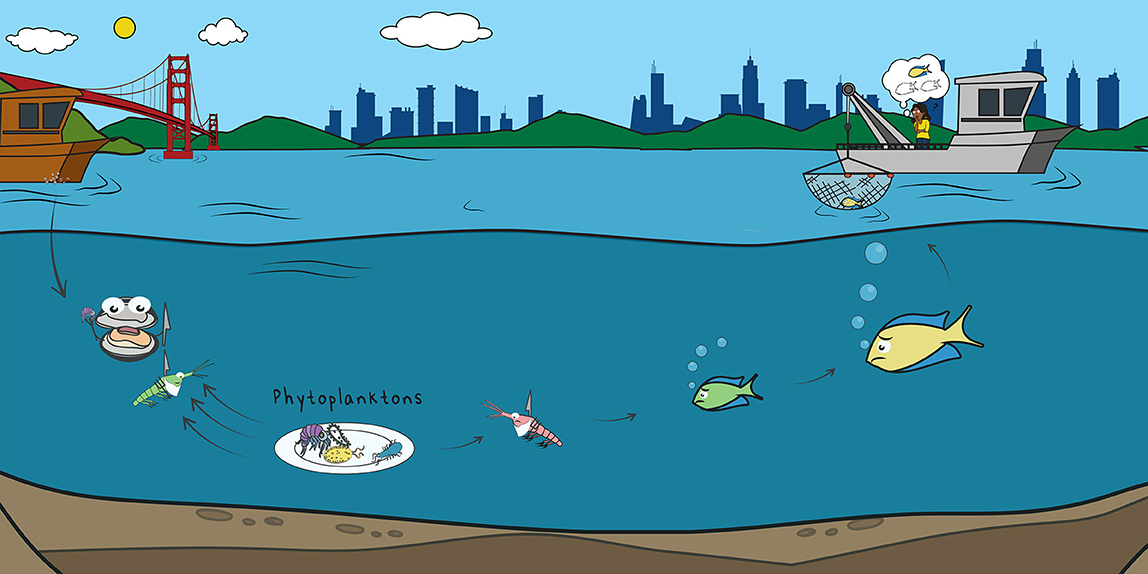 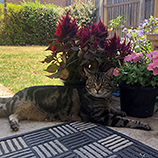 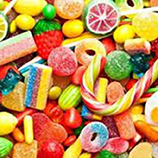 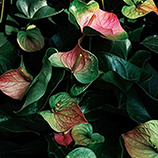 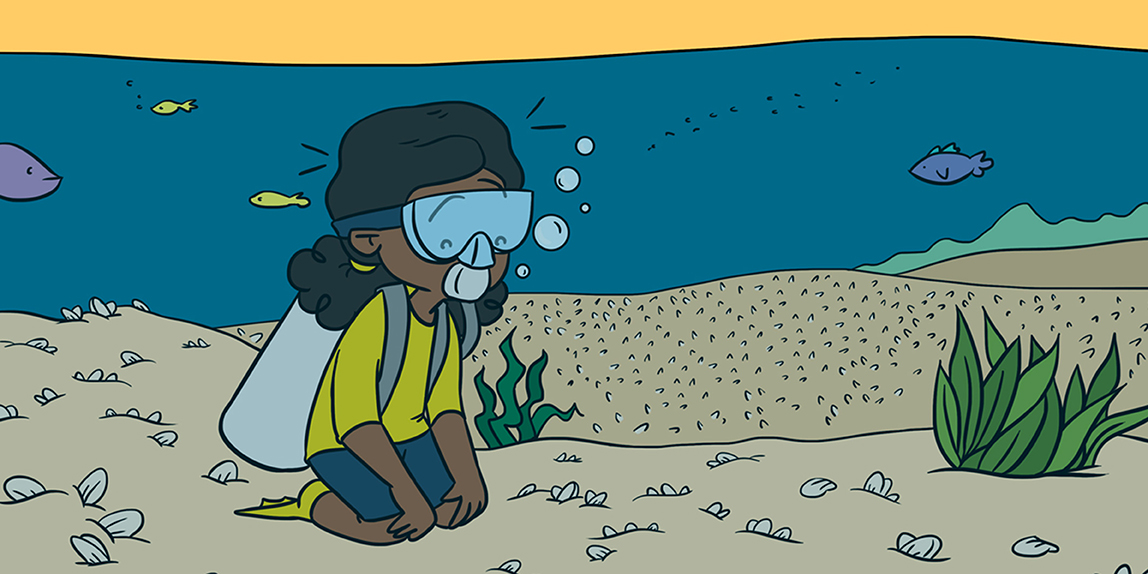 If You Give a Clam an Estuary: The Story of...

When you look at San Francisco Bay, what animals do you see? You may see lots of fish, birds, harbor seals, and sea... 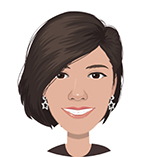 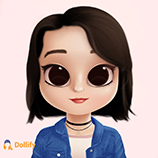 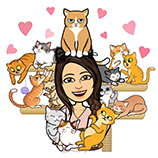 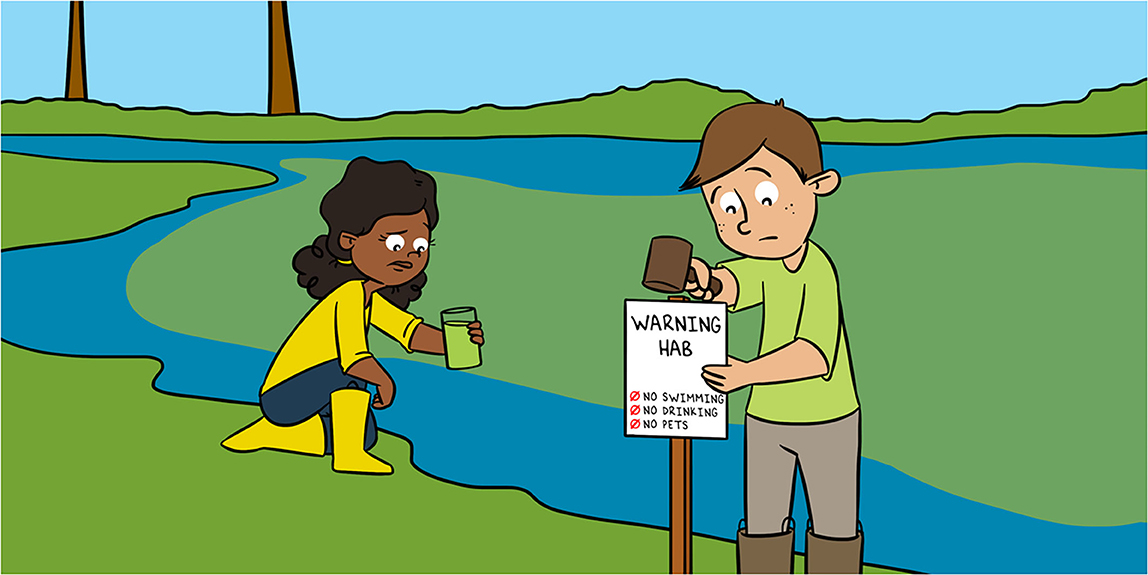 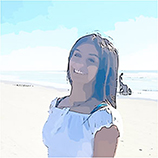 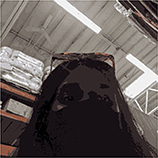 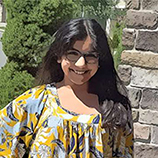 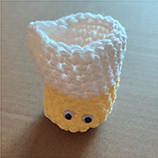 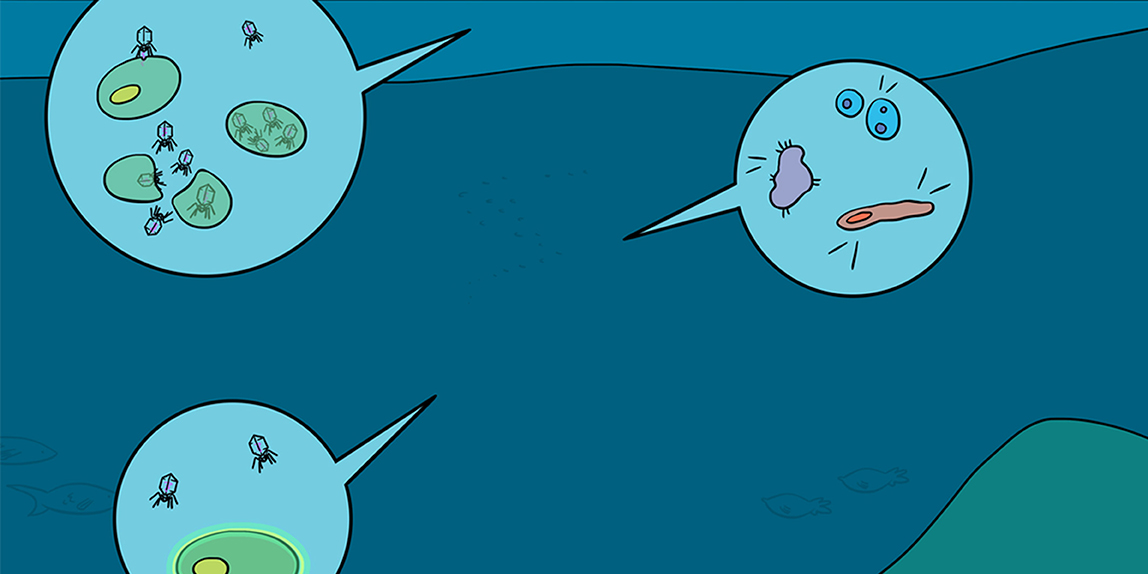 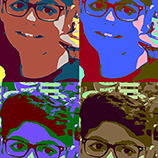