How Can We Learn Foreign Language Vocabulary More Easily? 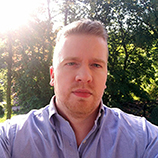 Brian is interested in how people learn and remember complex sounds, such as speech and music. He investigates how the brain supports multisensory and sensorimotor forms of communication. Brian is currently a Research Associate at the TU Dresden in Germany and studied psychology and neuroscience at McGill University in Canada. *brian.mathias@tu-dresden.de 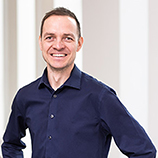 Christian Andrä works at the University of Leipzig as a lecturer and researcher in teacher training. His research focuses on learning in motion. In several projects he develops teaching content that can be presented by means of sensorimotor enrichment. Since 2008 he is also member of the research group “School in motion,” which aims to reduce sitting time and utilize the numerous benefits of physical activity during everyday school life. 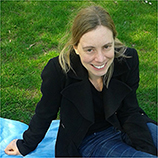 Katja M. Mayer received her diploma in psychology from Tübingen University in Germany and wrote her diploma thesis at the Max Planck Institute for Biological Cybernetics. She then moved to Newcastle University for her Ph.D. in neuroscience, and later held post-doc positions at the Max Planck Institute for Human Cognitive and Brain Sciences and Münster University. Her research interests are multisensory perception and learning. She currently works as a psychotherapist. 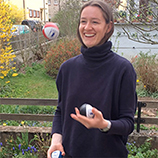 Leona Sureth is a medical student at the University of Leipzig, Germany. The mysteries of the human brain fascinate her, so she is interested in how the brain works and how science can be used to understand that. Besides her interest in medicine and neuroscience, she enjoys playing any sport that involves a ball and knows how to juggle. 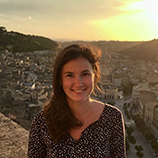 Andrea Klingebiel is a medical student studying at the University of Leipzig. During her studies she was fascinated by neuroscience and always curious to experience and participate in research. So she was very happy to have found this wonderful and exciting project. She enjoyed studying the human brain and doing her little part to help understanding it a better. 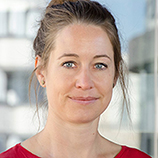 Gesa’s research group at the Max Planck Institute for Human Cognitive and Brain Sciences is interested in cognition and neural plasticity, especially in the language network. How does the language network adapt to neuronal challenges, e.g., induced by neurostimulation, noise, or training? How does the brain recover and repair function after a lesion? These and other questions drive our research. 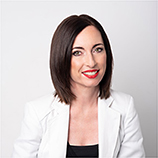 Dr. Manuela Macedonia is a senior scientist at Linz Johannes Kepler University in Austria and a guest scientist at the Max Planck Institute for Human Cognitive and Brain Sciences in Germany. Manuela’s scientific interests reside in embodiment of language. In her base research, she investigates the effects of gestures on memory for foreign language words in the short and long term. In her applied research, she develops and tests virtual environments and virtual teachers for mobile devices that allow ubiquitous embodied learning of foreign language. 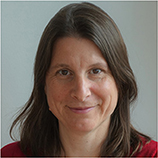 Katharina investigates human participants’ brains to better understand how we communicate with each other and what is different in the brains of people with communication disorders. She studied medicine and philosophy and is currently Professor of Cognitive and Clinical Neuroscience at the Faculty of Psychology at the TU Dresden in Germany.

I am fascinated by all topics in STEM, especially 3D-printing, robotics, and astronomy. My hobbies include Legos, playing card games, learning magic tricks, and watching the Office on Netflix.

I have been interested in science since age 7. My favorite journal to read is Scientific American. My academic interests include chemistry, economics, and entrepreneurship. My hobbies include equestrian show jumping, playing board and card games, puzzles and riddles. 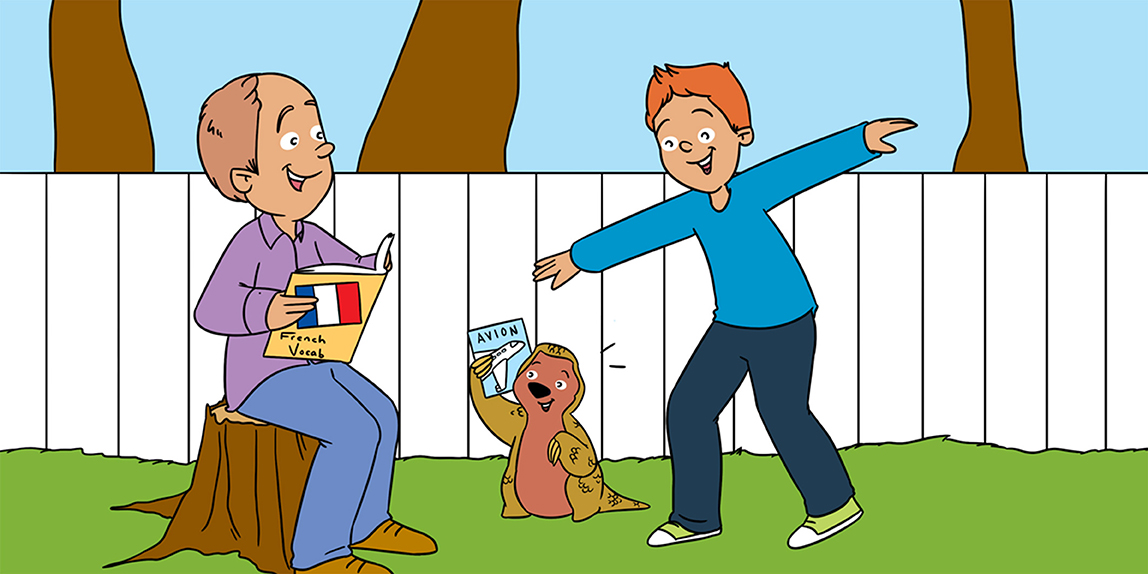 How Do We Learn Vocabulary in a Foreign Language?

Languages are important because they allow us to communicate with one another. People living on Earth today speak over 6,000 different languages [1]. Each of those languages has tens of thousands of words, or vocabulary, that refer to objects in the environment, people, places, feelings, and thoughts. Since you are reading this article, which is written in the English language, English may be your native language (L1)—the language that you started to learn at birth. You may also have learned English at school, from teachers or books, or by hearing English words outside of school. If this is the case, then you probably learned English as a foreign language (L2). One of the most important steps for learning a new language is to learn the vocabulary of that language. This takes a lot of time and practice.

To learn an L2 word, we must hear how the word is spoken or see how it is written and learn the meaning of that word. Kids and adults use many strategies to learn L2 words. They might, for example, listen to audio recordings or study word lists. Recent research suggests that such techniques are less effective than strategies that use enrichment [2]. Enrichment refers to information presented during learning that allows us to experience the meaning of a word through multiple senses [3]. Instead of learning an L2 word by just listening to it, for example, we could see a related picture while listening to it. This happens when reading picture books and when learning vocabulary with picture cards. Another enrichment strategy could be to perform gestures that display the meaning of a word while listening to it. The word airplane, for example, could be displayed by moving our arms through the air as if they were wings.

We first tested our hypothesis in young adults [3]. Twenty-two adults heard L2 words and their L1 translations during 5 days of training. The adults were taught words that they had never heard before, such as diwume and giketa. A complete list of the words that the adults were taught can be found here. Some words were paired with pictures (Figure 1). For example, when the adults heard the foreign word that meant tent, they also saw a drawing of a tent. Other words were paired with videos of an actress performing gestures. For example, a video of an actress drinking from an imaginary bottle was paired with the word that meant bottle. The adults performed the gesture along with the actress. The rest of the words were learned only by listening to each L2 word and its L1 translation.

We next tested whether gesture enrichment would also help kids [4]. Ninety-seven 8-years-old German school kids learned English L2 words over 5 days. They learned the words using pictures, gestures, or no enrichment (Figure 1). The kids were taught English words that they had never seen or heard before in their English courses. The kids completed the same vocabulary tests as adults at 8 days, 2 months, and 6 months after learning. The kids gave their answers by speaking rather than writing.

We found that kids had higher test scores for words learned with both pictures and gestures compared to no enrichment at 8 days, 2 months, and 6 months after learning. Like the adults, pictures and gestures were equally helpful in the short-term (8 days and 2 months after the start of learning). However, unlike the adults, the kids’ test scores following gesture- and picture-enriched learning were equivalent 6 months after learning (Figure 2). This result suggests that gestures and pictures were equally helpful for kids’ L2 learning. The kids’ scores were lower overall. This could be because the kids received less training than the adults.

What Brain Areas Are Involved in Learning Foreign Words?

So far, we have tested these hypotheses in adults [3]. To see which areas of their brains were active, 22 adults completed a brain scan after 5 days of L2 vocabulary learning. More information on how a brain scan measures brain activity can be found in this Young Minds Article [9]. We examined responses within the bmSTS, motor cortex, and LOC while the adults heard and translated the L2 words (Figure 3). We found that responses in the LOC told us if a word was learned with pictures, and responses in the bmSTS and motor cortex told us if a word was learned with gestures. These results tell us that specific brain responses are linked to the helpful effects of picture and gesture enrichment.

In scientific research, one method is usually not enough to prove that a conclusion is correct or not. The reason for this is that all methods have specific strengths and weaknesses. We therefore also examined whether the bmSTS and the motor cortex caused the benefits of L2 enrichment using a method called transcranial magnetic stimulation (TMS) [5, 6]. During TMS, small magnetic signals can affect brain activity and cause changes in behavior. We found using TMS that the bmSTS and the motor cortex helped adults to translate words learned with gestures.

What Do Our Findings Mean?

Learning enrichment, with both pictures and gestures, helped kids and adults learn foreign language vocabulary. However, adults benefitted most from gesture enrichment, while kids benefitted equally from picture and gesture enrichment. This means that the types of enrichment that work for adults might not necessarily work for kids. In our studies, kids and adults received different amounts of training; future studies may investigate how different amounts of training may improve enrichment effects. We also found that the brain uses its visual and motor areas for remembering the translations of enriched L2 words. This means that enrichment teaching strategies may work because a network of visual and motor brain regions contributes to enhanced learning outcomes. In sum, enrichment benefits L2 learning because it allows us to experience the meanings of words with our own senses.

Vocabulary: ↑ The set of words used in a language.

Native Language (L1): ↑ A language that a person has been exposed to and started learning from birth.

Foreign Language (L2): ↑ A language spoken mostly by people in another area of the world than the speaker.

Enrichment: ↑ The presence of additional, complementary information during learning that helps to illustrate the meaning of a foreign language word.

Hypotheses: ↑ Assumptions that can be tested by carrying out scientific experiments.

Motor Cortex: ↑ The part of the brain that can initiate movements by controlling the muscles.

Lateral Occipital Complex (LOC): ↑ A visual area of the brain that responds when people see objects.

Transcranial Magnetic Stimulation (TMS): ↑ A neuroscience method in which the brain is affected by small magnetic signals.

The authors would like to thank those who assisted in the translation of the articles in this Collection to make them more accessible to kids outside English-speaking countries, and for the Jacobs Foundation for providing the funds necessary to translate the articles. For this article, they would especially like to thank Nienke van Atteveldt and Sabine Peters for the Dutch translation. This work was funded by the German Research Foundation grant KR 3735/3-1, a Schulbezogene Forschung grant from the Saxony Zentrum für Lehrerbildung und Schulforschung (ZLS), and an Erasmus Mundus Postdoctoral Fellowship in Auditory Cognitive Neuroscience. BM is also supported by the European Research Council Consolidator Grant SENSOCOM 647051 to KvK. 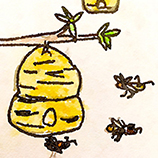 When we talk, we often make hand movements called gestures at the same time. Although just about everyone gestures when...