Is Too Much Fertilizer a Problem?

I am a Post-doctoral Researcher at the University of Vienna in Austria. My research is focused on understanding how bacteria survive and grow in the environment. I am really interested in microbes called nitrifiers, which are microbes that use nitrogen compounds (like some found in fertilizer) to get all of their energy. The goal of my research is to understand how nitrifiers grow so we can control how and where they grow in the environment. Outside of science I enjoy listening to music and playing ice hockey. *sedlacekc88@univie.ac.at 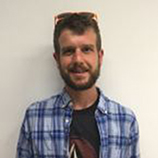 I am a Post-doctoral Researcher at the University of Aalborg in Denmark and the University of Vienna in Austria. My research interests are focused on microorganisms in soil involved in nitrogen cycling. In particular, I want to know more about the physical and chemical factors that control the activity of different groups of microorganisms involved in the nitrogen cycle. I am also interested in how the activity of these tiny microorganisms can have big impacts on agriculture and environmental health. andrew.giguere@univie.ac.at 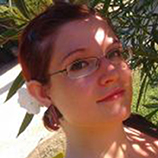 I am a Senior Scientist at the University of Vienna in Austria. I research how different microorganisms grow and what they can eat. This information is stored in their DNA, their genomes—which is like the hard drive of a microorganism that contains all the data on what it can do. Based on this information, I want to understand why some microorganisms grow better in certain environments than other microorganisms. When not at work, I explore the parks and forests around Vienna with my three children. petra.pjevac@univie.ac.at 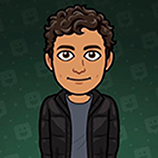 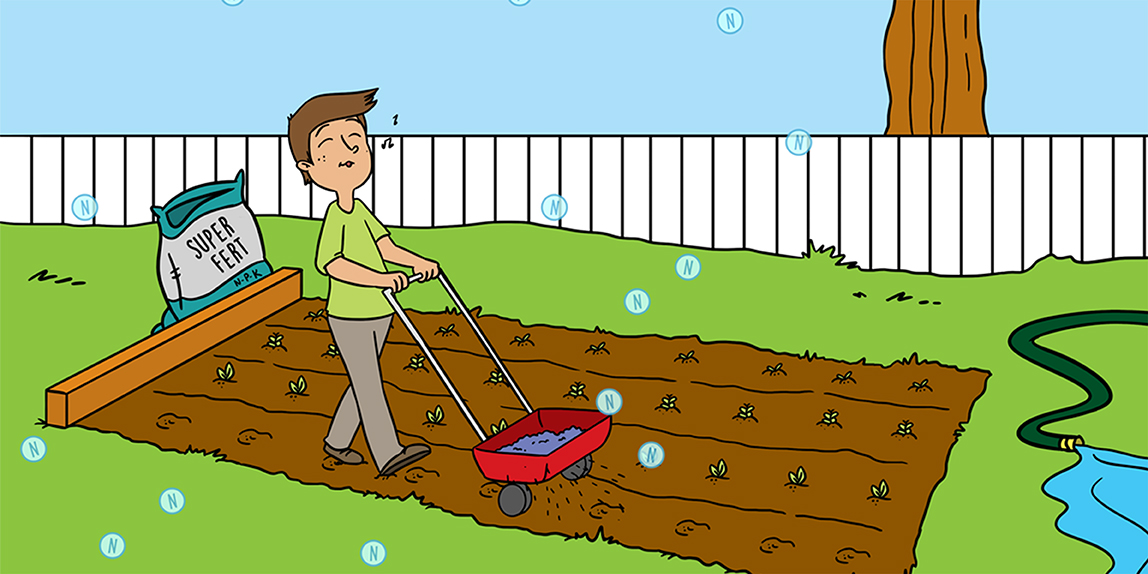 Fertilizers are added to crops in order to produce enough food to feed the human population. Fertilizers provide crops with nutrients like potassium, phosphorus, and nitrogen, which allow crops to grow bigger, faster, and to produce more food. Nitrogen in particular is an essential nutrient for the growth of every organism on Earth. Nitrogen is all around us and makes up about 78% of the air you breathe. However, plants and animals cannot use the nitrogen gas in the air. To grow, plants require nitrogen compounds from the soil, which can be produced naturally or be provided by fertilizers. However, applying excessive amounts of fertilizer leads to the release of harmful greenhouse gases into the atmosphere and the eutrophication of our waterways. Scientists are currently trying to find solutions to reduce the environmentally harmful effects of fertilizers, without reducing the amount of food we can produce when using them.

Fertilizer is any substance or material added to soil that promotes plant growth. There are many fertilizer varieties, and most contain nitrogen (N), phosphorus (P), and potassium (K). In fact, fertilizers sold in stores have an N-P-K ratio on their packaging. Fertilizers are applied all around the world to keep lawns green and to produce more crops in agricultural fields. Fertilizers can be divided into three groups:

Why Do We Need Nitrogen-Containing Fertilizers?

Nitrogen is one of the elements, or nutrients, that all living things (microorganisms, plants, and animals) need to grow. Although, there is a lot of nitrogen all around us (~78% of the air we breathe), most of the nitrogen on Earth is present as a colorless and odorless gas, called nitrogen gas (N2). Unfortunately, plants and animals cannot directly use nitrogen gas. As humans, we get our nitrogen from the food we eat. High protein foods like meat, fish, nuts, or beans are high in nitrogen. Plants get their nitrogen from the soil and nitrogen is the most common nutrient to limit plant growth. There are two ways nitrogen gas is naturally transformed or “fixed” into nitrogen-containing compounds that can end up in soil, without human intervention (Figure 1):

However, even with all this natural nitrogen fixation, low nitrogen levels in soils often still limit plant growth. This is why most fertilizers contain nitrogen compounds and why industrial fertilizers are essential in order to produce enough crops to feed the human population. Humans now add as much or more industrially fixed nitrogen (~150 billion kilograms) to the environment each year, than is naturally fixed [1, 2]. One hundred and fifty billion kilograms (~330 billion pounds) of anything is hard to imagine, but this is equal to the weight of ~24 million fully grown adult elephants!

How Are Nitrogen-Containing Industrial Fertilizers Produced?

As mentioned, most nitrogen on Earth is present as nitrogen gas, which is unusable for plants and animals. In the early 1900’s, scientists discovered how to transform nitrogen gas from the atmosphere into nitrogen-containing compounds that could be used to fertilize soils (Figure 1). This industrial fixation is called the Haber-Bosch process. Almost all the nitrogen in industrial fertilizers is fixed through the Haber-Bosch process.

This industrial fixation of nitrogen is performed in chemical laboratories and large factories all over the world. The Haber-Bosch process requires that nitrogen gas be mixed with hydrogen gas (H2) and put under enormous pressure (200 times atmospheric pressure). This is the pressure you would feel if you dove 2,000 meters (~6,500 feet) underneath the sea, which is a longer distance than 6 Eiffel Towers stacked on top of one another! This pressurized gas mixture is then heated to very high temperatures (450°C/842°F). Sustaining these high pressures and temperatures requires a huge amount of energy. The Haber-Bosch process is estimated to consume 1–2% of the world’s energy supply each year [2].

Why Do We Use So Much Nitrogen-Containing Industrial Fertilizer?

Where Does the Nitrogen From Nitrogen-Containing Fertilizer End Up?

The crops take it up of course! Unfortunately, that is not the end of the story. For a more detailed look at all the reactions in the nitrogen cycle, you should read this Young Minds Article: “What is the Nitrogen Cycle and Why is it Key to Life” [3]. In an average agricultural field, only ~50% of the nitrogen from fertilizers is used by crops [4]. So, while fertilizers make crops grow better and faster, half of the fixed nitrogen we add is lost. Imagine that—we lose the equivalent of 12 million nitrogen elephants (~165 billion pounds) every year! The lost nitrogen can end up in the atmosphere or it can be washed out of the soil and end up in waterways, such as groundwater, streams, lakes, rivers, and oceans (Figure 2). This lost nitrogen causes a variety of environmental problems [2].

What Environmental Problems Do Nitrogen-Containing Fertilizers Cause?

Some soil microorganisms can transform nitrogen provided in fertilizers into nitrogen-containing gases, which get released into the atmosphere like the greenhouse gas nitrous oxide (N2O). Greenhouse gases are one of the main factors accelerating global warming. Nitrous oxide has a warming potential ~300 times greater than the most commonly mentioned greenhouse gas, carbon dioxide (CO2).

In waterways, the addition of external nutrients (like excess nitrogen) is called eutrophication. Eutrophication is an unwanted fertilization of a waterway and it promotes the growth of microorganisms, algae, and plants, just like the fertilization of soil. However, the fast growth of microorganisms and plants can use up all the oxygen in these waterways and turn them into so-called dead zones, because aquatic animals cannot live without oxygen. Eutrophication can also lead to the growth of algal species that produce toxic chemicals, called harmful algal blooms.

While we need nitrogen from fertilizers in our agricultural soils, we do not need or want additional nitrogen in our atmosphere or waterways. This means we have to balance the positive benefits of nitrogen fertilization (more food) with the negative consequences of excess fertilizer (environmental problems) [1, 2]. Scientists are currently working to find this balance to improve our current situation.

What Fertilizer Related Research Is Currently Being Done?

One main goal of fertilizer related research is to decrease the amount of industrially fixed nitrogen that is lost (~12 million elephants worth) to the atmosphere and waterways. This solution is called improving the nitrogen use efficiency of agricultural environments. Here are a few examples of ongoing fertilizer research:

Microbiologists and soil scientists are working on ways to improve field conditions to promote the growth of naturally occurring soil nitrogen-fixing bacteria. In addition, they are also working on ways to prevent the growth of soil microorganisms that contribute to fixed nitrogen being lost to the atmosphere or waterways (Figure 3). Together, this would reduce the overall amount of nitrogen-containing fertilizer needed to get the same crop yield.

Chemists are working on designing fertilizers that are stable in soils over longer time periods and are less likely to be broken down by microorganisms. These slow release fertilizers release little bits of nutrients at a time, so nutrients are available throughout the lifetime of the crops. This approach is still dependent on nitrogen-containing fertilizers, but it would reduce the amount of fertilizer needed and decrease the nitrogen lost.

Fertilizers provide crops with essential nutrients like nitrogen, so that the crops grow bigger, faster, and produce more food. However, applying too much fertilizer can be a problem because it leads to the release of greenhouse gases and eutrophication. Scientists are currently trying to find solutions to reduce the amount of fertilizers needed, without reducing the amount of food produced.

Nitrogen Fixation: ↑ The process of converting nitrogen gas into nitrogen containing compounds. Nitrogen fixation can occur naturally through lightning strikes, be performed by specialized microorganisms, or be accomplished industrially.

Haber-Bosch Process: ↑ An industrial nitrogen fixation process that can be performed in a laboratory to produce fertilizer components. It was discovered by and is named for the scientists Fritz Haber and Carl Bosch.

Greenhouse Gases: ↑ Gases that trap heat in the atmosphere much like the roof of a greenhouse traps heat to protect the plants growing in it from cold weather and frost.

Eutrophication: ↑ A change in an environment’s nutrient status caused by high levels of nutrients (nitrogen or phosphorus) entering waterways (lakes, rivers, or oceans). One major consequence is harmful algal blooms and the loss of aquatic life.

Linnea Kop graciously created and granted permission for the use of her illustrations for all of the figures used in this article. 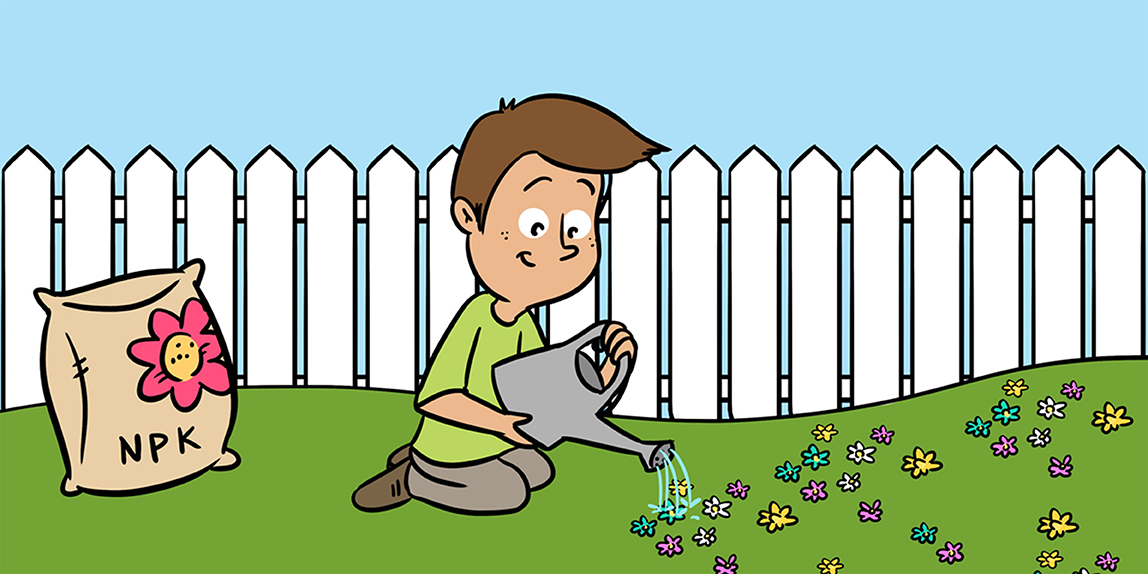 What Is the Nitrogen Cycle and Why Is It Key to...

Nitrogen, a colorless, odorless element, is all around us: in the soil under our feet, in the water we drink, in air we... 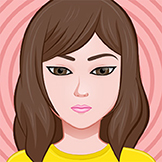 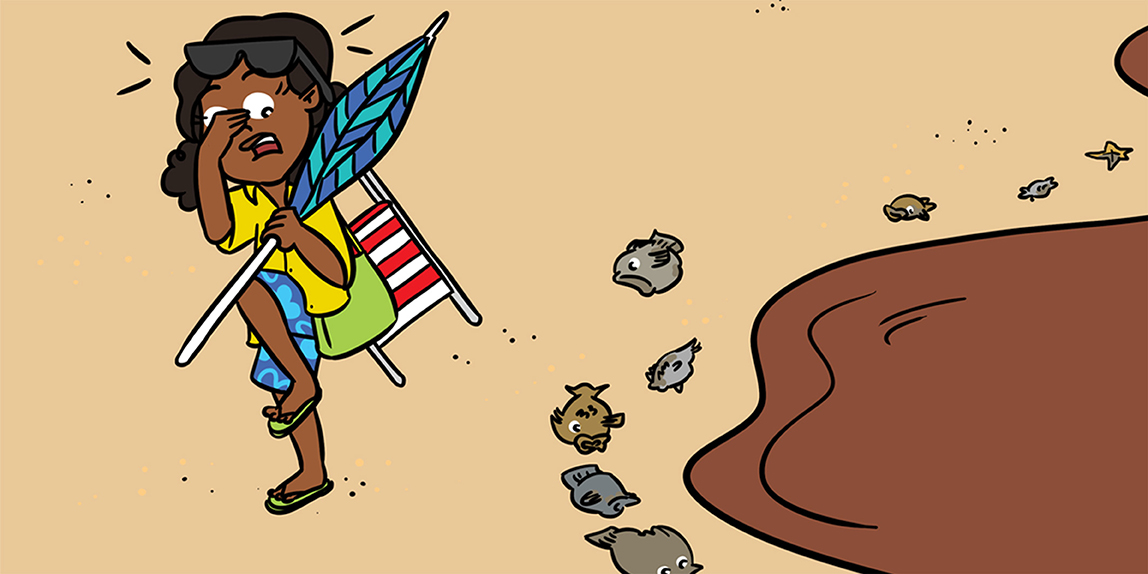 Why Were the Water and Beaches in West Florida So...

The coast of Florida experienced a red tide, during summer 2018, an event resulting from an overgrowth of algae that... 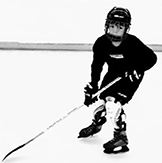 Many of the foods we eat today look very different than they did in the past. Corn, or maize, didn’t exist ten thousand...