How Do We Learn Skilled Movements? 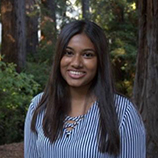 Anisha Chandy is an undergraduate student at the University of California, Berkeley. She is interested in how people learn and adapt their movements in response to changes in the environment and in the body. In her spare time, she enjoys baking, reading, and spending time with her family. *anishamchandy@berkeley.edu

Jonathan Tsay is a Ph.D., student at the University of California, Berkeley. He is interested in how people learn and acquire skilled movements. In his spare time, JT enjoys taking long walks, visiting new hipster coffee shops, and playing with the world’s cutest cat, Kiki.

Rich Ivry is a professor of psychology and neuroscience at the University of California, Berkeley. He directs the Cognition and Action lab, using various tools of cognitive neuroscience to explore human performance in healthy and neurologically impaired populations. Rich Ivry has a long-standing interest in the cerebellum, seeking to understand the role of this subcortical structure in skilled movement, timing, and through its interactions with the cerebral cortex, cognition. 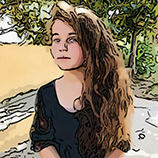 I am an 8 years old girl. I grew up in Lebanon, In a very beautiful village. I love Science because I can understand how the brain works. I also love chocolate and painting. 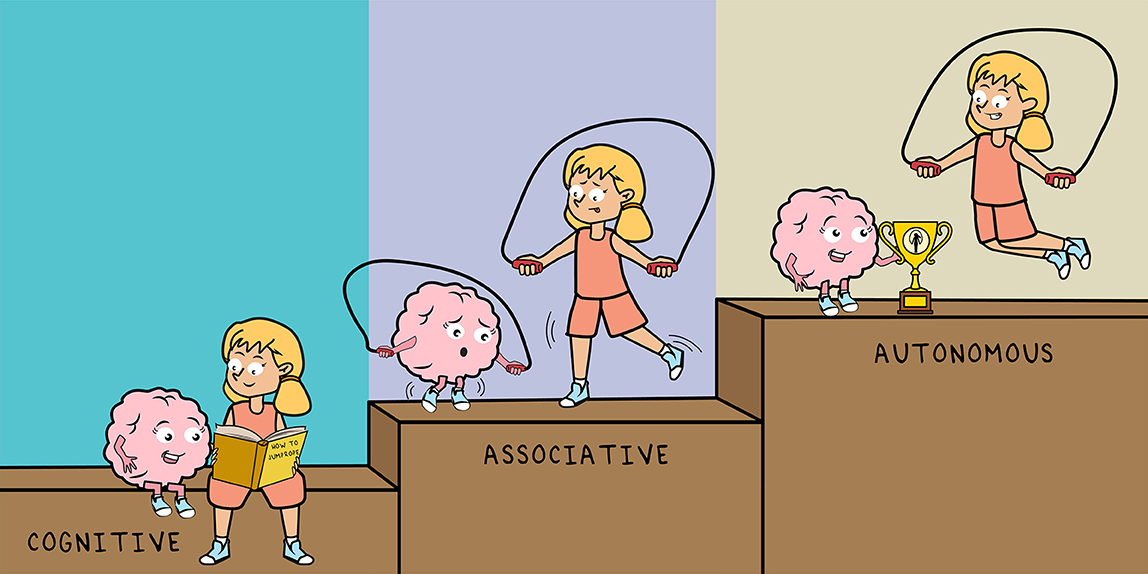 All athletes were novices at one point in their lives, even Olympic gold medalists and world champions. They committed years of practice to become competitive and even longer to become elite performers. This transformation from novice to expert requires motor learning, which is the process of acquiring and refining motor (movement) skills. Inspired by the observation that motor skills evolve from being effortful to effortless, psychologists have divided motor learning into three separate stages: the cognitive stage, in which we gather information about the actions needed to perform a skill; the associative stage, in which we refine our movements; and the autonomous stage, in which our movements become smooth and automatic. Here, we will explore how a fictional young athlete, Amy, progresses through these three stages and uses different parts of her brain to make the transition from novice to expert.

How do you cross the street or pick up your heavy backpack? How do you get out of bed or open a car door? It is astonishing how we can move and coordinate so many different muscles at the same time with so little effort. But not all movements are alike. There are large movements that involve the body’s biggest muscles, like the bicep muscles that help you throw, or the quadricep muscles that help you walk. There are also smaller muscles to control the fingers, essential for fine and precise movements, such as those necessary for playing the piano or using a pencil.

How do we acquire new movements as well as fine-tune old ones? We do so through the process of learning and refining motor skills. Inspired by the observation that motor skills evolve from being effortful to effortless, Fitts and Posner proposed a model that divides motor learning into three stages: the cognitive stage, the associative stage, and the autonomous stage [1]. In the cognitive stage, we rely on cognition, or the processing of new information, to determine what steps are necessary to make a movement accurately. In the associative stage, our movements are refined by feedback from the environment (for example, how far a frisbee misses a goal) and feedback from our bodies (for example, whether the frisbee was thrown with proper technique and posture). In the autonomous stage, our movements become automatic and flawlessly executed, without really having to think about them. To illustrate these three stages of motor learning, let’s examine how a fictional young athlete named Amy learned to play frisbee [2].

Amy’s motor learning journey began with the cognitive stage, in which Amy spent a lot of time trying to understand how the game of frisbee works and what types of movements are required. She consulted books and instructional videos to figure out all the physical motions needed to throw the frisbee, trying to absorb all this new information as fast as she could. For instance, Amy realized that she needed to grip the frisbee with her index finger and thumb, curl her wrist toward her body, and release the frisbee while rotating her shoulder across her body.

Amy’s first few tries were way off. The frisbee barely spun. Even on the next day, the frisbee spiraled out of control, flying straight into the bushes. Her frisbee throw lacked consistency, which is common in the cognitive stage. Despite her frustration, Amy continued to rehearse the sequence of movements required for a successful throw.

After a few weeks of training, Amy became fluent in the basic frisbee throw. Her improvements were momentous, but her throw was far from perfect. Amy then entered the associative stage of motor learning. She transitioned from learning what movements to perform to fine-tuning how these movements should be performed. Through trial-and-error, Amy became more accurate by tightening her grip and including a follow-through after her throw. Amy’s movements became more consistent and refined in a steady manner, relying less on her knowledge of frisbee and more on her sensory feedback like proprioception, which is the awareness of where the body is in space.

After years of continuous practice, Amy has become an expert, and is the captain of her frisbee team. Amy is now in the autonomous stage of motor learning, throwing a frisbee quickly and accurately across the entire field. Her movements have become effortless, automatic, and at times, even outside her awareness. Her learning, however, has started to plateau, with minimal improvement even with extended practice (Figure 1).

If Amy stops practicing for a long time, she might forget some of what she has learnt. However, skills that are well-practiced and automatic are forgotten more slowly than skills that are less engrained in memory. If Amy picks up a frisbee after not playing for a while, she may initially feel a sense of “rustiness” or clumsiness from forgetting these motor memories. However, she will be able to re-learn frisbee skills faster than when she learnt them for the first time. For instance, re-learning how to ride a bike after years of not biking will be much quicker than learning how to bike for the first time.

The Role of the Brain in Motor Learning

The brain is divided into many regions, and these regions perform specialized functions that, together, allowed Amy to learn how to throw a frisbee (Figure 2). There are three brain regions that seem to be essential in motor learning: the hippocampus, cerebellum, and motor cortex [3]. The hippocampus is thought to store new memories and is crucial for remembering the necessary steps of a frisbee throw during the cognitive stage of learning. The cerebellum is thought to help refine the frisbee throw using visual feedback and proprioception, and it is especially important for learning via trial-and-error during the associative stage of learning. Finally, the motor cortex helps coordinate the direction and force of a frisbee throw, relaying information from the brain to the muscles in an automatic manner. As these brain regions (and many others) become more in sync, Amy’s frisbee throw will become less effortful and more automatic in the final, autonomous stage of learning.

Skilled movements, like throwing a frisbee, evolve through various stages of learning, and recruit many brain regions and muscle groups. Next time you pick up a new sport or skill, notice how you progress through the three stages of motor learning: the cognitive stage, in which major improvements in skill arise from instruction and demonstration; the associative stage, in which movements are gradually refined through trial-and-error; and the autonomous stage, in which movements, once effortful, become automatic and effortless. In conclusion, Fitts’ and Posner’s model has not only helped us to understand the basis of motor learning but has also made sports training for athletes and physical rehabilitation for patients so much more effective.

Motor Skills: ↑ The ability to make a specific movement, like kicking a ball or tying a shoelace.

Cognitive Stage: ↑ The stage in which significant improvements in skill arise from instruction and demonstration.

Associative Stage: ↑ The stage in which movements are steadily refined through trial-and-error.

Autonomous Stage: ↑ The stage in which movements become automatic and effortless

Proprioception: ↑ The awareness of where the body is located in space; body awareness.

Hippocampus: ↑ The region of the brain associated with forming and storing new memories.

Cerebellum: ↑ The region of the brain responsible for maintaining posture and integrating signals from the environment and body to make movements more accurate and efficient.

Motor Cortex: ↑ The region of the brain that coordinates different muscles and specific sequences of movements.