Can The Size of a Fish Mother Determine the Size of Her Offspring? 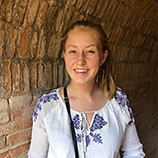 I am a graduate of Kalamazoo College with a degree in Biology. For a group project, we had to translate a scientific paper into one accessible for children, and we were shocked when our project was actually accepted for the journal. I am hoping to start a career in habitat restoration, and I am particularly interested in the ways that we can use plants, fungi and microbes to restore and measure ecosystem health. *emily.hamel17@kzoo.edu 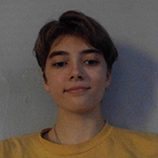 I am a person who greatly appreciates the outdoors. I studied biology at Kalamazoo college, worked at a State Park and am currently employed as a naturalist. I am passionate about nature, and work hard to preserve our natural habitats. *margaret.roethler17@kzoo.edu 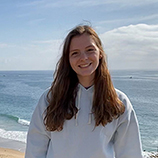 I am a graduate of Kalamazoo College where I studied Biology and Psychology. My passion is in the health sciences and I hope to become a pediatrician (doctor for children)! I also enjoy learning about evolutionary ecology because I love nature and being able to understand how our ecological world works! *caitlin.tremewan33@gmail.com 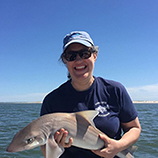 Holly Kindsvater grew up in southern California and studied Marine Biology at UC Santa Cruz, where she fell in love with ecological research. For graduate school, she studied fish ecology and evolution at Yale University. She then was a postdoc in Vancouver, BC, and a research professor at Rutgers University. In 2019, she became an assistant professor of Fish and Wildlife Conservation at Virginia Tech. Her lab studies the population ecology of marine and freshwater fishes, as well as salamanders. She lives in Virginia with her husband and son.

I love all kinds of science, but especially space sciences. I love reading fantasy and science fiction especially about space travel. I want to go Mars someday or at least contribute to the mission to Mars. I like playing Minecraft and Roblox with my little brother. I also love soccer, mountain biking and taekwondo. I currently live in Germany but I am from Temple Terrace, Florida, and look forward to returning to Florida in 2022. 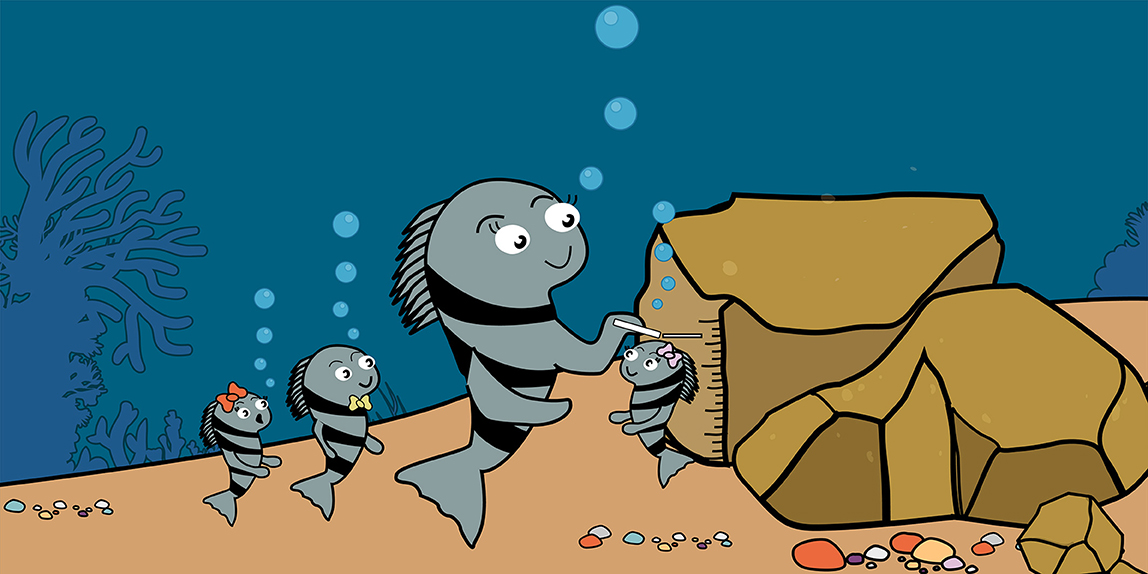 What affects the size and health of fish babies? The size of a young fish may strongly influence its chance of survival after hatching, so it is important to understand why fish are born in the condition they are. One answer could be the age and size of the mother, but this has been hard to study in the wild. Sheepshead swordtail females carry their eggs until the baby fish are born swimming. Therefore, since most of the growing happens inside the mother, her offspring can only grow so big. This means that scientists can determine the condition of the babies by trapping the mother and measuring her age and size. Our research group used sheepshead swordtails to check if a mother’s age and size affects the size and health of her offspring. We found that larger, older swordtails produce larger offspring!

Why Are Babies Big Or Small?

Every human baby is born a little different. Some have hair and some do not, they can have different eye colors, and some are bigger than others. This is true for a lot of species, not just humans. Even if we cannot easily see it, every baby fish is born a little bit different than its siblings. These slight differences can have a big effect on the little fish as it grows up. One of these important early differences is the size of the fish at hatching—how big a fish is can determine how well it survives. Normally, bigger fish larvae are healthier than smaller ones and tend to live longer in the wild [1]. It can be dangerous to be a little fish, with a lot of other fish species (and sometimes even its own species!) trying to eat it, but a larger size helps a baby fish to escape from predators more effectively. Also, if a baby fish has many siblings, it will have to compete with them for food, and the bigger fish are typically able to get more food. Of course, not only does the larval fish have to compete with its siblings, but also with unrelated members of its own species or even other species. Being bigger can help a fish to be faster and outcompete others. Finally, being born larger also means the baby fish will grow up faster than the smaller fish with which it is competing. Therefore, it is quite important for a fish to be big at birth if it wants to survive.

Even though size is important, we still do not know exactly what determines the size of each fish larva. This can be very complicated, as both the parents’ genes and the surrounding environment can affect what a baby looks and acts like. Our research team wanted to explore the relationship between the size of the fish mother and offspring size, and we hypothesized that bigger and healthier moms will have bigger and healthier offspring. We expected that bigger moms would have bigger offspring because the moms have more resources that they can pass down to the babies. In other words, fish moms can physically afford to create larger offspring. Similarly, healthier moms are expected to have healthier offspring because those moms often have more energy, which they can give to their offspring [2].

How Do We Choose Which Species to Study?

Scientists decided to study the size differences in baby fish…but there was a problem. Fish commonly lay eggs into the water, and the eggs can be difficult to find. Once we find eggs, it is even harder to identify their parents. Then, we thought of the sheepshead swordtail. Sheepshead swordtails (Figure 1) are unique because their offspring are already able to swim around by themselves, instead of hatching from eggs. The mothers carry the eggs inside of them until the embryos are ready to hatch. This means we can study “pregnant” females, wait until the baby fish are born, and easily know which offspring are from each mother.

There are two main strategies animal mothers use to help their offspring survive to the next generation. Some species have many offspring in the hopes that at least a few of them will survive. Others have only one or two offspring at a time, like humans, and watch over their babies until they are old enough to care for themselves. The sheepshead swordtail’s strategy is to have many offspring, so it is likely that only the largest and healthiest will survive. The offspring must fend for themselves as soon as they are born because the mother fish does not take care of them. These fish normally have around 30 offspring at once but can have up to sixty. Sheepshead swordtails live for about 3–5 years and can grow to up to 12 cm long. These fish live in the rivers of Mexico, where this study was done.

How Did We Study Size Differences?

We used traps to capture pregnant female fish. To figure out the size of their babies, we took the eggs from the pregnant mother and weighed each egg, assuming that a heavier egg meant a bigger baby at birth. We then measured the lengths of the moms. To figure out how healthy the moms were, we measured how much fat they had. A healthy fish typically has more fat, as fat means the fish has had enough food to eat. We trapped fish from three different rivers in Mexico to compare the fish from each river, because fish populations are slightly different in each place. Factors such as food, water, temperature, and the number of predators may make the same species of fish look and act differently in various locations or the fish may have offspring of different sizes because of where they live. These environmental conditions could be more important than the size, age, or condition of the mom.

As it turns out, the size and health of the mom can affect the size of her babies. At some sites, large sheepshead swordtail moms had the largest eggs, which means their babies will also be the largest (Figures 2A,B). We also found that, in each river, larger fish moms tended to be older and healthier than smaller moms. Unlike humans, who stop growing after we reach young adulthood, fish keep getting bigger throughout their lives. Therefore, the oldest fish are also the biggest ones because they have had more time to grow. In fact, measuring the mother was the most accurate way to predict offspring size. The health of the mother, however, did not seem to affect the size of the offspring—but it did influence how soon she could have more babies. Both maternal size and health are important in a baby fish’s life, but size seems to have a bigger impact on the size of the offspring.

As you may recall, data was collected from three different rivers (Figure 2). Two of the rivers, San Pedro and Coacuilco rivers, showed the results we discussed above. The third river, Cocolaco river, did not, meaning that maternal size did not impact offspring size there (Figure 2C). This highlights the fact that each population of fish is different, and the mothers respond to different environmental cues. In some cases, it might be evolutionarily advantageous for the mother to have smaller offspring, so that she can save more energy for later. If, for example, females are in a lot of danger, like when lots of predators are present, it might be better for fish moms to have many, smaller offspring, which is better than not having any offspring at all [3]! Overall, however, our results suggest that, in addition to the environment, the size of the mother is a good way to predict how big her offspring will be.

Why Do We Care About Fish Size?

These findings have implications for how we manage fisheries. Fisheries can change the characteristics of a fish species over time by, for example, if only large fish are harvested [4]. Catching only the largest fish is a type of selection that leads to an evolutionary change in the size of fish [5]. As we learned from this study, larger fish tend to be older and to have more offspring, so if most of the large fish are harvested, the size of the fish in that population will get smaller and smaller because the large ones will not be around to reproduce. Fisheries could work around this by limiting the number of large fish that can be caught, to maintain the variation in size.

In summary, larger fish mothers tend to have larger offspring. Larger fish offspring have survival advantages, such as speed and strength compared to smaller fish. This study was important because it allows us to understand how traits of a mother can be passed down to her offspring which affects what the new generation of fish look like and their survival.

Larvae: ↑ An animal in its immature form before it transforms into its adult stage.

Offspring: ↑ The babies or young born to parents. Children are the offspring of their parents.

Fisheries: ↑ Places where fish are caught to be sold for food.

Selection: ↑ Evolutionary process by which organisms that have the best traits for their environments survive.

Evolutionary Change: ↑ Change in the traits that offspring inherit from their parents so that they are more likely to survive and reproduce.